Well, I'm out of commission for a week with vanilla (not swine) flu (on what was meant to be time off for wedding preparations - so I had even less sympathy than normal due to suspicions that my flu was too well timed to coincide with fittings, shopping and preparations), and the Academy of Modding Excellence announce their nominations for NWN2. Proud and suprised to be included there with 4 nominations! Veteran Author, Best Action, Best Roleplay, and Misc. Custm Content.

Last year was when the quality of the mods on the vault really ramped up as the community showed what it can do (and I think the next generation of releases such as Zork, Trinity, Misery Stone, Better the Demon, Shattered Dreams, amongst several others will be building on that even further). So was suprised to see Dark Avenger 2 up there amongst the great competition from the likes of AmstradHero and others. Good to see the Halloween mod being recognised too. It does make me feel worse for shelving the Dark Avenger project tho... still think it was the right choice, but

Being called a 'Veteran' is amusing given the noob mistakes and fudges that pepper my time on the toolset, and that my only other playable release that year was one-joke-one-trick pony The Elemental Plane of Rats. Was very suprised to see my foraging system up for nomination, mainly as it is quite a simple system, and something I think the goodie system in SoZ takes a step further, but glad if it's been of use to others.

So, NWN2-wise, now my head is less fuggy, and my Fort saves vs. disease seem to be kicking in, I need to catch up on missed writing time for Shattered Dreams. Maybe next time, I'll post more on some other plans... 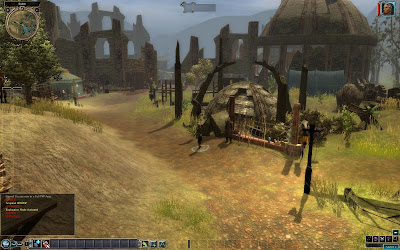 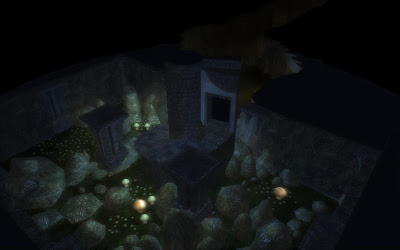 Reading this blog post from Kamal made me realise something. I always liked dark areas too, and have my preferred interior lighting to give the desired effect. Dungeons and caves should be dark and shadowy, to be atmospheric and tense places to visit. Most of the creatures have darkvision, so other than roasting hobbits, won't need lots of lit fires. But then along comes the PC. Chances are they will have a torch, but chances are they'll also have a mage. Who can cast Light. Or maybe a race with darkvision. And then all sense of atmosphere is lost. It's something that has always bugged me, but I hadn't quite put my finger on it. The Light and darkvision VFX makes things too washed-out bright - now everything is too stark, the murky cave walls look grainy - all that effort with carefully place lights lerping between phosphorescent colors is wasted. Yes, these effects should make things more visible, but it'd be nice if there was some murkiness left. Maybe having light create an effect like carrying a torch would be a better bet... or tweaking the bloom in these areas so the don't light things up as much (but then would need placed lights being tweaked)... 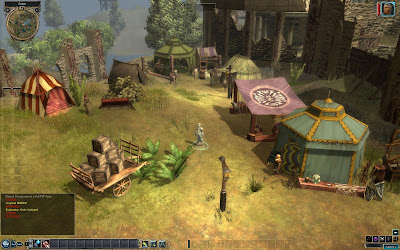 It's less of an issue in exteriors. In the OD&D campaign I play in, I've always liked the idea that the thief scouts ahead just at the edge of the light source held by the rest of the party, looking for traps in the gloom, but hopefully hidden to suprise the goblins that run down the passage after the main party.