Mid-teleport astral indecision led to the party arriving in Crossroads, capital of Ne'er-do-well, a better place for shopping and for Felix to report back and retire from the party. Felix bade the party farewell, heading back to report to King Koryn on the progress now that the Crimson Fleet had been routed. The party stayed in the quarters at the Temple of Asterius under the eye of the cleric Articulate, whilst they stocked up on spells and equipment to better face the yagnaloth in the pirates treasury.

The next day, the party teleported back to the Wreck. There was no sign of other activity, just the growing stench of bodies, but the stagnant water seemed thicker with glistening green algae. Mendel spotted movement in one of the gibbets; a horribly disfigured red-skinned pirate, bird-like mutations warping his body and face. He was clearly in pain and Mendel put an end to his misery.

Dacien has arcane locked the treasury door, so readied to open this with a knock  for Antony to slip in under Zhedd's greater invisibility. The yagnaloth had moved all the chests to the far corner of the room so not to be visible from the door, and was waiting poised for someone to enter. Antony snuck into position for a backstab, as Faldak and Mendel enter - both succumbing to the forbiddance effect in the chamber. Both were stunned by the creature, and Mendel was dragged into the chamber. Fortunately, his stunning wore off quickly and he was able to flank the creature, allowing Antony to finish it off with a couple of well-placed strikes. The treasure hoard was theirs, the largest of their adventuring career so far, and more coins than they could count. They secured what they could, but were left puzzled by a large ornate chest decorated with seven gargoyle faces. The party did not recognise this, and as Antony detected each face carried a trap, they left it be for now.

They set about clearing the rest of the base, starting with the ship below - the Black Sprite. This seemed to be the Fleet's war-room and operations - rooms filled with books and maps, charts etc (see below). They also found a shrine - a scrimshaw statue of Demogorgon leering over a doorway. In its tentacles floated an orb, an intricate puzzle box. After a couple of failed attempts that almost severed his fingers, Antony managed to open the orb. The room filled with a narcotic gas, Faldak's dwarven constitution failing him, as the statue seemed to come to life. Antony's mind was flooded with the knowledge that he was no directly communing with Demogorgon. He asked tentative yes/no questions - Is Vanthus on Gaping Maw (Yes)? Is there a master pearl (Yes)? but the intrusion into Demogorgon's psyche was too much and she noticed. With a sibilant sneer, the statue exploded, ripping a hole in the side of the ship.

Dacien has  a feather fall spell ready, and the party started floating to the deck below - on which waited the demonic retriever. Faldak was hit by a petrification ray, and plummeted onto the golem. Mendel peppered it with stonebreaker acid and arrows from above, as Dacien returned Faldak to his fleshy beardy self. Quick to regain his senses, Faldak started lopping off legs from the creature, bringing it tumbling down around him.

Antony found a symbol of insanity  and was briefly mobidly fear of the sea before Gerald could cure him. This ship held a galley and a gaol - in which the party found an elven woman's body, and a comatose red-skinned pirate with a badly broken jaw. They restored the pirate, who introduced himself as Ratline Sid from Torreon, one of the mutineers that Cold Captain Wyther had captured and tortured for more information about the mutineers. He confirmed what the party had heard - Vanthus had returned and humiliated the captain in front of his fleet. This sparked a mutiny amongst the already disgruntled captains - unhappy at plying trade under the yoke of Hule, so far from their home on the Savage Baronies, and now being driven by Demogorgon's clergy. Sid was sad to hear of the death of Harliss, and keen to escape and rejoin with the fleet mutineers. The party agreed to bring him with them for now and kept a close eye on them.

Sid explained that the creature kept in the front stone hut was a dark beast bound there by Wyther, who could move the pontoon from afar to allow ships in. The party decided to keep clear - more on the basis it was unlikely to have any treasure. They found a shrine to Demogorgon in another hut, with a dark tapestry depicting slaughter in the beasts name, and an altar covered in candles; two black waxy stains now empty.

Giving the base the final once over, Zhedd spotted a movement in the water. Two large crocodiles were sent down after it, but didn't return - a muffled flash was visible under the murky pond scum. An eye appeared above the water to the side, and Dacien lowered water to reveal an eye of the deep. Faldak and Mendel drew their bows but both succumbed to its blinding flash and eye rays almost as quickly as Gerald could heal them. Eventually it was defeated, and the party found its treasure hidden behind an illusionary floor in  a nearby hovel.

The base cleared, the party retreated to Sasserine to plan further forays to collect all the treasures that couldnt fit into their bags of holding and scour over the maps and information they found. Aloysious was going to have his work cut out...

Charts and shadow pearl locations as recovered from the pirates war room
1. Across Alphatian/Thyatian empires; 2. Close up of 'Known World' 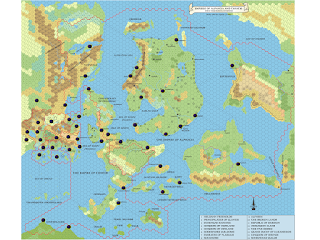 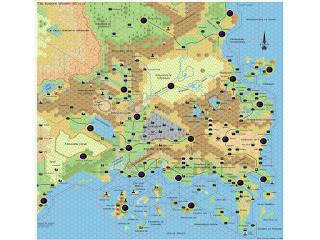