This area spun out of a side plot I was musing over, and quite like how it turned out. It's nothing fancy - not many placeables - but happy with the mood and lighting. 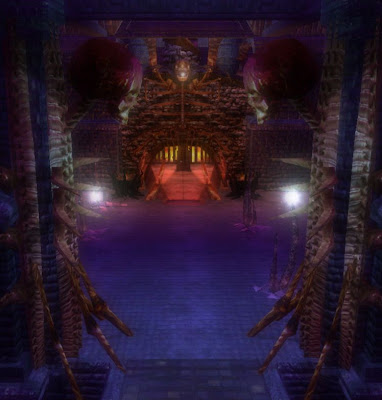 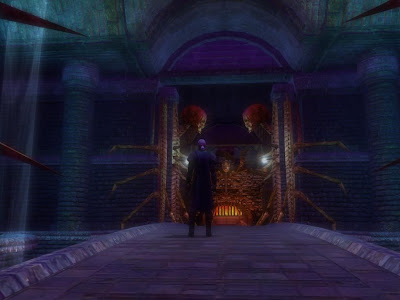 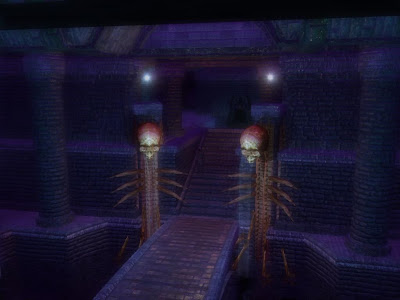 So this area came about mainly as the result of the poll into cutscenes during dungeon crawling - so one I started led into a whole new branch of plot - optional but if completed will add a nice touch later on.

So, I finally got annoyed with myself on Friday - I'd let myself get too disorganised, and it was really slowing me down. Check out E.C.'s planning on Into the Forgotten Realms , Amraphael's bug hunting on Zork and Elysius' approach to Faithless as examples of building approaches - really puts my scribbled notes to shame. So I sat back and made a step by step list of everything that needs to be done in order to get this chapter finished, and put it all in perspective. Now, in theory I can work through and cross off each step as it's done. List isn't as daunting as I thought it might be, and a lot of it is dialogue/cutscenes, and rounding out the journal entries. I'm thinking about putting out an alpha version of the main quest minus some of these final touches to get the bug hunting underway - by mid-May if all goes to plan. Any willing playtesters, bug-hunters and proof-readers let me know!

The nominations for the Community Recognition and Custom Content awards from the Academy of Modding Excellence have been released, and I'm up for Debut Author!

Pretty stoked at just being nominated, will see how it goes - tough competition. Congrats to all nominated, and it's nice to see some of the 'backroom' custom content guys being given recognition for some really great work

(from the forums)
Progress still a little slow due to that pesky thing called real life. But I've been finishing off some interiors, working on the basics for a new area, and working on some more cutscenes to punctuate the action. I've also had a chance to playthrough some of the quests more - and it's shown that I'm going to need help with the balance for one thing. On the whole it's hanging together fine, but some encounters are a bit too tough, so I'll look into that. Quick question - as a player would you prefer unrestricted resting, or restricted resting in specific locations, opr restricted resting with plot-relevant 'force rests' - e.g. just prior to big plot relevant battles, the party will be fully rested and spells restored?

A trip to the sauna 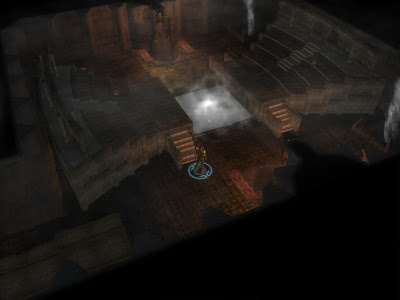 Evangelical posturing from one of the Miltia battle clerics 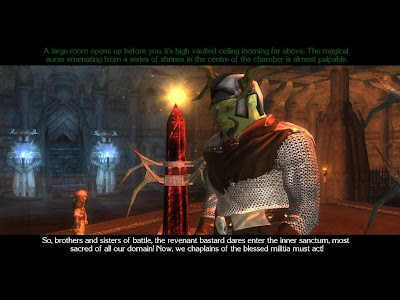 The trouble with mercenaries 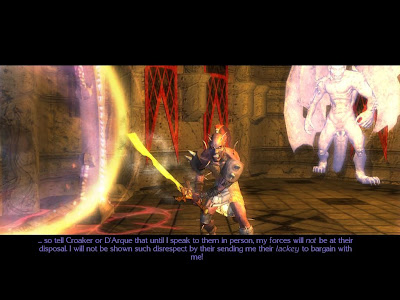 Pushing an NPC for information 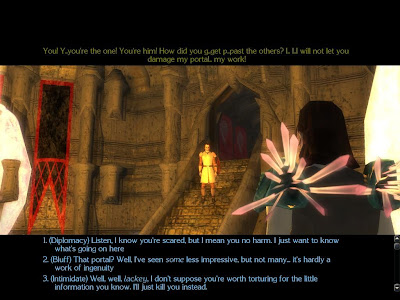 Swedish massages in the cells 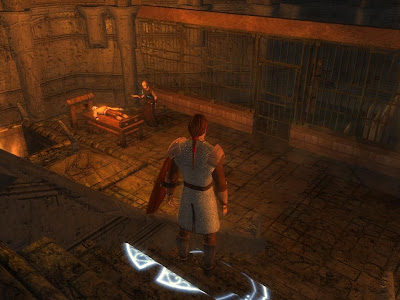 Base of the mage's tower 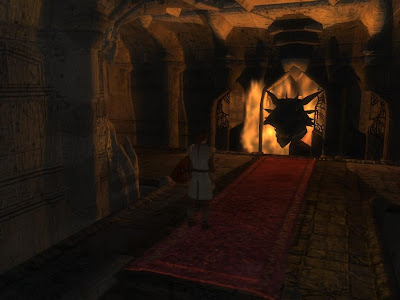 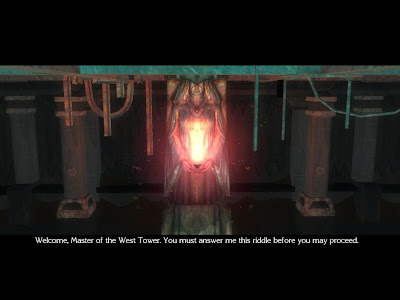 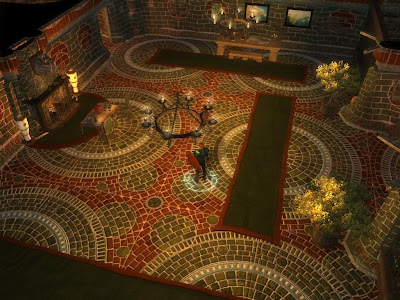 And finally, name that plane 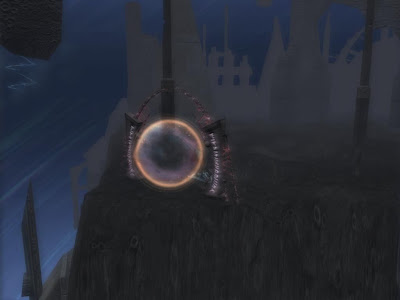 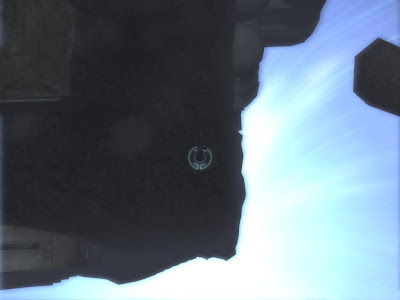 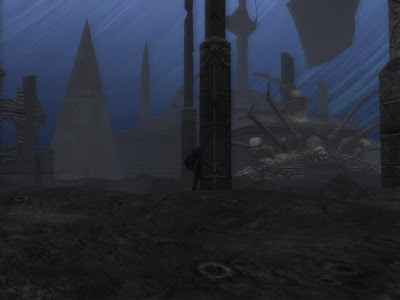 Placing Dark Avenger in the Realms

Been slowly getting back to the mod since the hassles of the past few eeeks, and got a new area almost finished and was working on some cutscenes last night. In a break from the toolset I actually played right through Chapter 1 (with some of the revisions I've been working on) to give me a saved game to launch tests in chapter 2 from for balancing. I took a Spirit Shaman as a kind of low-end benchmark (although I do quite like the class). With the party limit in chapter 1 it was much more difficult, so will look into that. Thanks to all for voting on that - what i'll probably do is set the party limit at 4 companions, but in the debug book, I'll eave an option for modifying this. In my playthrough, I only got as far as finishing the first sidequest in Chapter 2 (which took a good 90 mins or so). But man, it was tough going. I think I'm going to ave to scale back on some mobs, and I'll probably increase the number of plot-related XP gains to move things along a little more. But I did enjoy playing the sidequest and really happy with some of the set pieces.

So, I know I'm due a proper update, but not got much to show (again). So I thought i'd post some background. As I've said, Dark Avenegr the idea started based on the intro to a song. But translating that to the game I wanted to incorporate some proper D&D and Faerun lore. Because of some of the ideas I had, I didn;t want to commit to a specific area of Faerun - I didn't want people nit-picking any liberties I took. But, once I got going, I did always build with one place in mind

And that was Cormyr. Now this is somewhere that has been done to death in many products - if you've played pen-and-paper as well as the NWN work (Wyvern Crown etc), and many of the novels. SO there is quite a bit out there. But my main reasons were geographical for the type of terain and layout I was looking for. Chapter 3, which will take you to the city I call Ellesmere Port, which will actually be based on Marsember from FR canon. And I'm working in some Cormyr lore to chapter 2, e.g. the Purple (and Blue) Dragon Knights. Gork (the goblin companion) is also tied in with the Goblin Wars that befell Cormyr, but I won't go into that too much. So i'm going to be moving from 'FR-lite' to 'medium' in terms of formalising the setting, but still keeping the town names I set out with.

In terms of Cosmology, I'm sticking with D&D/Grayhawk canon rather than FR - because that's what I'm most comfortable with. There is one 'sidequest' (although many of the sidequests I have are simply different parts of the main quest which can give different options or make portions of the main quest easier) in Chapter 2 which involves planar travel, and more in later chapters (particualrly the climax, whenever that will be). So rememeber to wear a stick of celery in your lapel.


Congrats to all winners, and the rest for putting up a good field. My vote went to Subtlety of Thay, which i think deserves it almost as much for the things you dont see when playing for the things you do. Check out Dirtywicks blog, and pester him to hurry up and stop messing with silly things like beholders...

And finally, a big thank you to the guys who voted for Dark Avenger in the contest - with such great alternatives, I'm really pleased you gave me your vote and support.

Sadly several pretty major stress-inducing real life issues have crept up (the very least of which being me getting food poisoning after going to a wedding in Scotland (no haggis jokes)). This has sapped free time and, perhaps more importantly, the creative drive and desire to work on the mod. So there's not been much to report, and a break is in order. Hoping I can get back in the swing of things for the weekend, but we'll see.

In the meantime, check out Aphyxia, which form the first 30 mins of an early version I played seemed really promising. And also, feast your eyes on this offering from Jonny Ree and the BouncyRock crew, fiendish tactics courtesy of Dirtywick.