The party gathered at the steps down to the steamy cavern full of pools of bubbling volcanic mud. Feeling emboldened by the Heroic Feast Stefanie had conjured for them earlier, they set about planning their approach to tackle the kopru base of operations. Dacien and Stefanie drew up wards against evil mind control, and the party huddled in a protective circle as the descended the stairs. The cavern was very large, with thin, slippery mineral-encrusted walkways criss-crossing the pools. The heat was nearly unbearable, and each of them was covered in sweat within seconds; sweat that had nowhere to evaporate to in the humid, sulphurous foetid air.

Stefanie took off her armour to avoid sinking into the pools, as the more nimble team members scouted ahead. The occasional bubble of boiling mud burst over a party member, and more than once Rissashtak and Faldak lost their footing and fell in. They knew the kopru were in hiding, and it was Antony who spotted them first, as two muscular kopru swam at them through the mud. Throgiff was caught by surprise,  and crushed by its muscular tentacle. Mendel was caught too but managed to escape. The halfling was overcome, as his skull was crushed and his body dumped in the pool of mud. Taboo temple had claimed its first victim of the day. But not before a quick acting Ji retrieved the body and its goods.

The two kopru were killed, and Antony saw another in the distant shadows disappear back into the mud. Macutotnal's anger against the kopru came to the fore, as the intelligent bow took control of Mendel, and argued to press the attack. The rest of the party managed to counsel caution. From then on the party decided to travel together. They explored the northern half of the chamber and found, encrusted in a large stalagmite, a skeletal body sat upon a throne. Macutotnal/Mendel explained that this is where the king of Thanaclan would receive guests before entering the temple to the west. The body bore a ring - the king's insignia with a power of telekinesis - and a bronze bastard sword with a sun emblem, that was strangely light for its size.

Ji used the telekinesis to move an arrow with a light spell cast upon it about the chamber and assess the layout. A well of boiling water lay on the southern wall, and Antony's keen eye spotted a buried box containing several emeralds. They also spotted a breach in the western wall, from where Ji had heard a bestial roar earlier. The party headed there next, narrowly missing a walkway that almost collapsed under them, which Zhedd then filled in by turning the mud to rock. The crevasse led to a small cave filled with the skulls of many different humanoids. Each skull bore signs of the brains having been scraped out through the nose. A passageway led out to the west and drier ground, so Stefanie set about putting her armour back on, whilst Ji did his best to give the skulls a more dignified send off. Faldak moved up to fire an arrow around the corner to the west, only to see a terrifying beast staring back at him; a disturbing cross between kopru and baboon in a twisted semblance of Demogorgon himself. A demonic crocodilian creature was entwined around his legs. 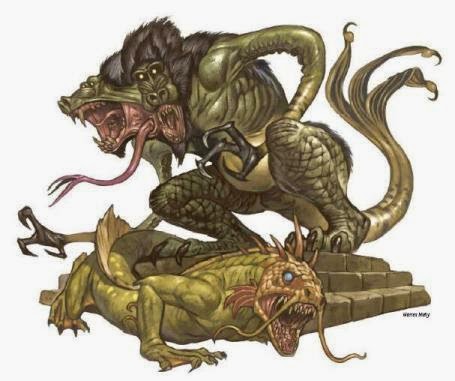 Ji tried to speak but Faldak had fired an arrow. The party geared for battle, only to find the creature was an illusion, which was still able to cast spells! Ji, Mendel and Faldak fought through into a large partially-flooded temple, where they were swarmed by six of the crocodile demons. The soundd of hawking and snorting came from the north, and a viscous acidic glob of snot and bile flew from the darkness to cover the trio, burning their skin and very souls. Mendel fired a light arrow back in that direction, and illuminated the real creature, stood in front of a fractured statue on a dais where there was also a melon-sized black pearl throbbing with eldritch energy. Zhedd conjured a solid fog about the creature to buy time whilst the others fought off the crocodiles. The wicked barbed tails on the demons caused wounds to bleed heavily, and Faldak and Ji began to struggle under the pressure. Suddenly, the large demon appeared in their midst, bringing an aura of fear and confusion with it which scattered the party immediately. It's tentacles carried a rotting power that caused flesh to slough off and decay.

A frantic battle was fought. Antony almost died, but managed to skip into the water ans swim to the pearl, which the party washed free form the bile and semi-digested brain matter around it, and slip into his haversack. He was met with a glob of energy draining snot for his efforts. Ji found a pile of treasures in a side room in which he was hiding in fear - likely the possessions of Noltus Innersol, given the blood-stained symbol of Ixion in their midst.

Once the crocodiles were dispatched, it left Stefanie fighting a vain battle alone against the beast. Rissashtak was being crushed by one of its limbs, but managed to escape. Ji, Mendel, and Rissashtak rushed to surround it, but the demon lashed out at all of them in a flurry that caught them all by surprise. Rissashtak and Stefanie felt their hearts rot from the inside before the life ebbed out of them. Two more victims to Taboo temple. Ji fell to the floor convulsing, and bleeding his last.

Dacien finally realised the game was up and called for retreat. Zhedd swapped a rat from  bag of tricks with Ji and the party desperately ran into Dacien's teleport spell back to Farshore. The beasts's mocking voice followed them "I will kill either your healer or your means of escape! I will find out where you live and kill everyone there!"