Back at Fort Gerard, Stephen was left to use the electronics he had salvaged to begin repairs to the reactor control systems, whatever they were. Faintly Macabre mentioned to Dacien that she thought Stephen’s strength and resolve would continue to weaken due to his proximity to this strange power source – the bloodroot might stave off his craving for now, but would only ever be a temporary effect. Faintly expressed an interest in adventuring and considered meeting the party in Farshore  in the future. Faldak and Mendel took guard duty on the roof of the fort, whilst Zhedd scryed for the Shadow elves to no avail. After a day’s rest and recuperation, the party teleport back to the capital of Emerond.

The capital Izmira was busier than on the party’s last appearance, but as the green-skinned Emerondian’s spotted the party, they dropped to their knees and bowed their heads in hushed whispers. Keen ears made out the phrase “Keeper of the Heart of Emerond” being repeated, and most eyes were following Gerald. The king greeted the party warmly, having heard from his gardeners that the deterioration of the plants had been halted. In the palatial baths, their heads anointed with scented candle, the party reported back (but kept the detail of Stephen’s existence silent) and shared their concerns that the Shadow Elves might return. The king agreed that a small trusted honour guard could be placed under Gerald’s command at the fort – he seemed to accept without question Gerald’s status in the kingdom. By way of thanks, we rewarded the party with several items from his armoury – plant-based weapons, armour and trinkets that might aid them on future quests. He agreed to allow the Church of Asterius to trade for their unique liquor, and also small amounts of the weapons.

The party spent much of the next few days travelling between Farshore and Sasserine, resting, resupplying and catching up on progress. Ji’s monastery was well underway, Mendel checked in with the Church of Asterius and Manthalay to discuss shipping additional cargoes to Farshore (Aloysius has ideas to fleece all parties involved, and set about sourcing appropriate goods). The alchemist had identified the fruits from the Isle of Dread as potent hallucinogens, and thought they could find value in the drug trade or development of alchemical gasses. Antony had Nosmo ferry passengers between Farshore and Sasserine, and also start spreading the word about the new route and port to other ship owners. Dacien asked the Temple of Ixion to send acolytes to Farshore, and teleported some there directly. Zhedd picked up his gloves for the Witchwardens, and then they were set to go.

The next stop was to call in the favour from the Church of Asterius to get the party introduced to King Koryn of Ne’er-do-well – so they could follow up on their leads to track down the shadow pearls in Scuttlecove. Dacien teleported the group to Crossroads, the capital, and went from there to an inn named the Inappropriate Eel. Crossroads was an odd city – beautiful buildings and marble statuary lined the once fine streets, but now were covered in graffiti, defaced and anything of value broken off and sold on. Half the populace were wearing featureless masks and very little eye contact was being made. The party found the inn on the harbour front and, leaving a special coin with the innkeeper, waited to be summoned.

A few hours later, they were shown in to a back room where a handsome man, with perfectly manicured fingers, lounged in a large cushioned chair. He introduced himself as Koryn and explained a bit of the history of Ne’er-do-well, Scuttlecove, and why his and the party’s goals were currently aligned

Ne’er-do-well: originally a kingdom of two islands called Artesia and run by artists, poets and musicians, mismanagement caused it to fall into ruin and become a home for the unfortunate, desperate and criminal elements. Koryn worked to shape this into what he called his ‘anarchy’ – a state where anything is legal, as long as it causes no physical harm, and where people are free – as long as they acknowledge Koryn’s rulership. He was proud that this was a place where people could find whatever they wanted – at a price. The masked visitors were those wishing to keep their presence, motives and identity secret.

Scuttlecove: a small port  on the volcanic swampy island of Lesser Ne’er-do-well, Koryn let his former travelling companions and pirates Kedward Bone and Rhemus Caldakar take up positions there. Kedward was a dashing pirate who fell to the ravages of a disfiguring disease, and became a recluse with strange predelicitions and drug dealing. Rhemus was a gnome sorcerer that has a business selling body parts. About 10 years ago, a group of exile Monks of Dire Hunger from the (Egypt-like) nation of Thothia petitioned Koryn for safe harbour and he allowed them to take residence in Scuttlecove. They built a palace, but then vanished a few years ago, leaving a haunted building behind. A sect of powerful Bellisarian wizards used to run a brothel in Porphyry House, but were ousted by a mysterious woman calling herself Tylrandi – who was seldom if ever seen. A group of coin skimmers, who make a living shaving gold off coins, named the Eighth Coil, had also become quite rich and powerful in the city.

What had raised Koryn's concern was the arrival of the Crimson Fleet, a powerful group consorting with demons and operating from a magically hidden base near Scuttlecove. Now the city was on the brink of civil war between the factions and Koryn feared for his reputation with the Alphatian Empire if this become too unruly, and also that one power group might seek to rival him. He wanted to put down any thoughts of rebellion – at arm’s length with nothing to be traced to him – by having the party investigate what was going on in Scuttlecove and tip the scales in one groups favour as they saw fit. Koryn wanted his anarchists in control.

So, if the party sought out the Crimson Fleet’s hidden base of operations, and took them out, Koryn could see stability returning. And he was willing to offer the party the resources of Ne’er-do-well, the favour of a king, in return. Koryn left at that point, and Felix, a rakasta agent, entered to brief the party further. He had been sent by Koryn to find Zimon Alvaneer, Koryn’s trusted spy in the city, who had disappeared without trace.  When Felix got to the city, he found out the Protectorate, Zimon’s network of agents loyal to Koryn, had been killed to a man. He returned quickly to gather a larger group and help him look into this. One potential port of call in the city was the tavern Rusty Shunt, run by a former pirate Lars Landicaster, who had a noble heart.

The party were shipped in Scuttlecove and saw it for the bustling depraved shithole it was. They saw demonic apes, robed disfigured monks, harpies and other creatures amongst the bustling, fighting crowds. All eyes were on them as they arrived, sizing them up as potential marks. They made it to the Rusty Shunt, but Mendel’s questioning put Lars on edge, and he didn't reveal much. Anthony spoke to the patrons and heard more about the city – apparently dashing female pirate that the party thought might be Harliss Javell was seen asking questions, and might be linked to a group of mutineers from the Crimson Fleet. Lars warned Antony off asking too many questioned, and Felix sensed some regret behind his words that maybe others asking questions in his care hadn't fared well.

The party decided to head through the thronging streets and explore the ‘haunted palace’ first, and in broad daylight (via the Plaza of Hanging Ruin, a mass crucifixion site run by the monks) went over the wall and broke in through the front balcony. In the entrance hall, decorated in Thotian style, they were attacked by shadows that lay hidden in large canopic jars. A vampire entered and told them they were trespassing, and left as swarms of other vampires attacked from either side. Dacien sent an arcane eye after the head vampire, but it stopped working once it got through the keyhole. As the party fought off the vampires, Zhedd and Felix who had been waiting outside on guard, arrived to warn them that a crowd was gathering by the gates outside. 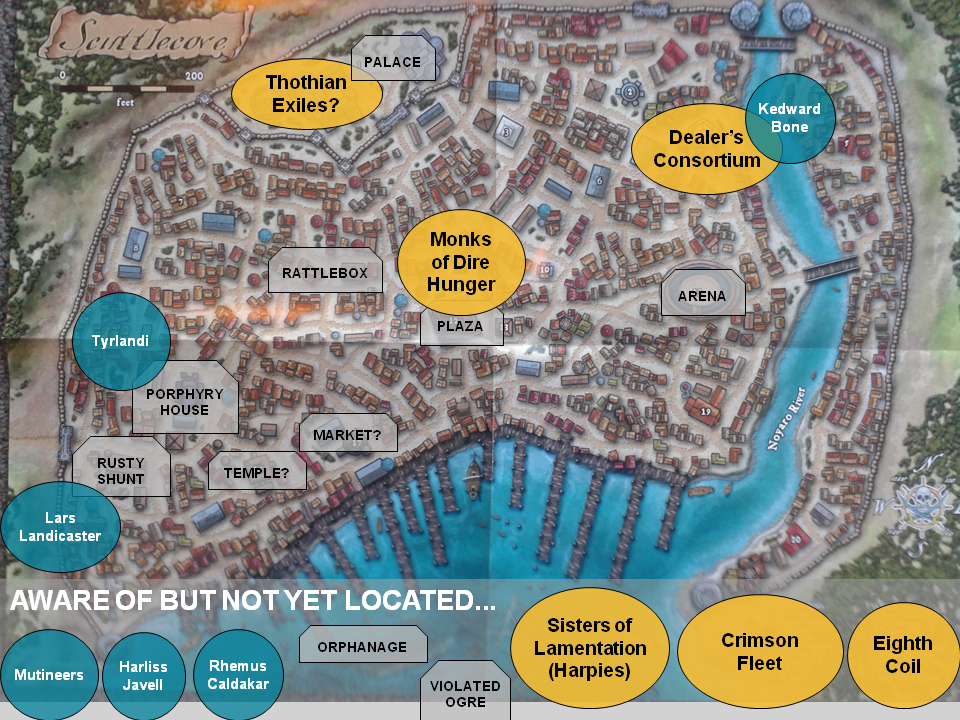