The rest of the party held off, as Mendel stepped forward brandishing the sun blade above his head, bathing the room in light and warning the vampire to retreat. The rest of the party stalled as the light from the blade grew. The creature spoke something, but Dacien's tongues spell had worn off and he couldn't translate. Instead, an answer came from a disembodied voice that echoed around the chamber. The vampire then backed off around the corner and out of sight. The two phanaton broke out a vial of stonebreaker acid and between them started dissolving the putty around the large red faceted window to flood the room with the light from the setting sun. Zhedd scrambled along the ceiling to do likewise with a stoneshape spell. Back in the corridor, sitting in the silence area, Antony noticed a movement in the corner of his eye and spotted one of the large dog-like machines from the room to the north stalking along the corridor. Dacien reacted quickly and put a wall of ice in place to slow it down. Faldak, reluctant having been warned by Dacien that the creatures will take pleasure in ripping through his armour and weapons, took up a guarding position in the corridors as the other made their way into the main room, with the dire wolves from Zhedd’s summons squeezing behind the dwarf to offer support. The wall only delayed the creature for a couple of rounds as it tore through the ice and made short work of the wolves too.

Gerald conjured a blade barrier back in the control room, knowing that there were two of the dog-like creatures, to avoid being flanked. Mendel dashed after the vampire and found him in a small chamber in the centre of the control room, dominated by a large white ‘throne’. The vampire was stood at the back of the room, near some vents in the wall, from which came the sound of chittering and squeaking. Mendel’s blade dug deep into the vampire, and it fled as a gas through the ventilation shafts. Mendel then found himself flooded by hungry rats that poured out of the vents to carpet the room and the archer. The window now free of its frame, Gerald and Lenny began creating water to conjure jets to wash the swarms of rats into the blade barrier and clear the room. Dacien took more time to examine the throne – with comprehend languages he was able to decipher the writing in the room too. The throne had a red dial on the left arm with the words RECORD, REWRITE and REPLAY etched around it. The dial currently pointed at REWRITE. Inserted into the right arm was a rectangular object that had flashing lights within, and written on the edge of this was a name “Stephen ‘The Rock’ Rocklin”; similar cassettes lined the wall with other names (one of them was ‘Mendel’), but also ‘Temple Indoctrination 1’ and ‘Temple Indoctrination 2’. Dacien sat in the chair, moved the dial to ‘REPLAY’ and his mind was flooded with images from the life of Stephen Rocklin. This started with a ceremony in front of a large crowd and a large metal ship of some kind; a flight through space; a banner depicting the leaping frog they had seen outside, but with the writing now legible reading ‘Terraforming Horticultural Expeditionary Force: Rigel Outer Galaxy’; the metal ship taking damage and crashing in a barren rocky  mountainous area; an argument with another officer on the ship; Stephen leading an escape attempt with some other green-tinted skin folk in a smaller ship, which was shot down; Stephen meeting some native elves and humans, and showing them the frog symbol; the building of the frog-shaped temple; Holding some of the humans and elves down in the throne and pressing ‘rewrite’; seemingly years later, one of the strange golems the party met outside attacking the temple building and damaging the large white tank the party had seen earlier; the golem being slain and tied to the altar and its brain removed; the people fleeing the temple as Stephen tried to repair the tank (bent over the terminal that the party had found recently damaged); Stephen researching in books from the locals a creature that had a certain longevity and resistance that might allow him to remain and maintain the building despite the dangers; and finally, Stephen mulling over a decision. The onrush of the mental images dazed Dacien and left him confused for a moment. Fortunately he recovered his senses to aid Faldak in fighting the mechanical dog, and ended the combat quickly with a disintegrate spell. The second mechanoid has slink down a side corridor to the levels below. Feeling battered from the series of encounters, the party teleported back to Sasserine to rest.

Dacien spent the night pouring over the diary they had recovered, which mirrored the story he had seen upon the throne – that Stephen Rocklin was part of a horticultural terraforming crew looking for new planets to explore, their ship The New City was struck by a missile whilst scanning Mystara, and crashed; the prime directive of his training did not allow for engagement and interference with native creatures, but Stephen felt, in the absence of any hope of rescue in the short term, interaction with the locals was necessary. This led to a rift with his commanding officer, and Stephen led a mutiny to escape in a life boat. That was shot down by the main ship, and crashed in this swamp, where, using the frog imagery from their vessel, they convinced the locals they were agents of the Frog God. The explorers then used the brainwashing powers of their memory recording technology to indoctrinate the locals into working with them, and with the terraforming engine, building a community that would allow them to interbreed and survive. Things went well for some time, until a cyborg sent by the corps security force tried to destroy all evidence of their presence here. This damaged the reactor power source, making the area dangerous for his  colleagues. Stephen commanded them to leave and build a new life in the surrounding areas, whilst he remained and tried to repair the damage and keep the terraforming engines running. The locals had spoken of a creature that had very hard to kill and could grant this power to others, so Stephen set off to investigate. His last entry was simply ‘what have I done?’

The next day, several of the party woke up to find much of their hair left on the pillows, and a general feeling of lethargy. This struck Lenny the worst, who found his skin highly sensitive and fragile. Something about being in the area of the temple had a prolonged effect on her. Dacien decided to visit the Witchwardens to enquire about possible solutions to Lenny’s problem. He also mentioned that they had met a powerful undead who might need some guidance. Dark Priestess Annah Teranaki welcomed the visit and information from Dacien. She alluded to some interference from the ’fool’ immortal Ixion during the last war (~4 years ago) which had altered something Annah described as the Radiance to drain entropy instead of energy/magic from the plane. This was having damaging effects on the undead that the Witchwardens were trying to help – and the vampire in control of the Radiance energy here was a prime example of the short sighted effects of Ixion’s interference. Draining of entropy was weakening undead, and causing any hungers that they might keep in check to come to the fore and be much stronger. Annah did not know much about the Radiance itself, but alluded to more happening in Glantri, and claimed to be researching more now it was directly impacting them – but that its powers could transcend magical effects, and cause damage that might be resistant to normal magical healing. Dacien requested something for Stephen to help control his hunger, and Annah gave some bloodroot. Zhedd had heard that this could sate a creature’s hunger for blood temporarily, but also that in a distilled form it could enhance it and drive vampires into a raging bloodlust.

The party gathered, had a fleeting moral crisis, and teleported to the Temple to try and peacefully deal with Stephen. However, he was waiting for them and hit Faldak with the heat beam weapons the party encountered before on the golems. Antony swiftly tried to call a truce and managed to convince Stephen to hold off attacking further whilst Dacien telekinsed the bloodroot towards him as a peace offering. Antony’s words worked and gave the party time to explain that they were in fact here to help. Stephen confirmed the background, but added that there had been some pale elves here that had wanted to investigate the technology inside the temple themselves – likely the shadow elves that the party had heard of in league with Bargle. They had damaged the terminal in the main reactor room, which meant the power levels were running lower and that explained why the terraforming engine could not sustain the structures within Emerond. Their tampering had also alerted the security cyborgs to the existence of the temple here, and they had arrived recently to try and remove all trace of the technology from the area. Stephen could not face them alone, but the party offered to take them out instead.

(EDIT: Lenny also asked about having the damage from the radiation cured; Stephen knew of no sure way to do this, but did mention a 'game console' on the lower level that could help albeit with a risk)

Stephen called out to ‘Weewak’ and the same disembodied voice from yesterday answered. Stephen asked for a report on intruders, and pinpointed the location of the 3 cyborgs in the temple, as well as drawing a holographic map for the party. As the cyborgs were mainly on the lower levels, they then prepared t o assault the temple nave through the gap in the ceiling they had seen previously. The party spotted several of the black cylinders with glowing red gems they had also seen outside onthe walls, scatted around the supporting pillars of the temple. The cyborgs were slow to react, but again responded with their lasers when threatened. Faldak was identified as a novel species, so a preservation protocol was engaged and they trapped Faldak in an immovable force field. Antony tried to exploit this tactic but using his hat of disguise to appear as unusual as possible. Zhedd spotted a giant toad on the levels above coming to investigate the commotion, and conjured  a wall of teeth to catch the cyborgs. One was dispatched b y Dacien’s magic, and the one o nthe lower level fell to Mendel’s arrows. Before it died, it ejected a glowing green rod, which detonated in a crackling purple sphere. However, this explosion caught the other black cylinders in its blast, which set off a chain reaction of explosions, removing much of the floor and all supporting pillars from the temple. An ominous groaning sounded from overhead...


Images of the layout, and the effect of the explosions below 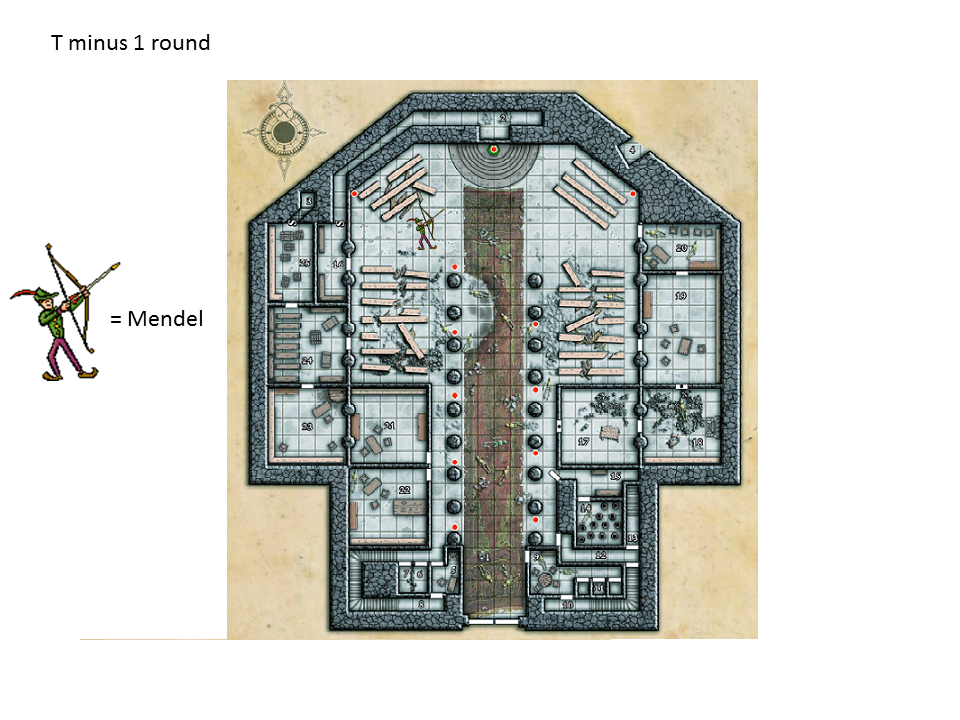 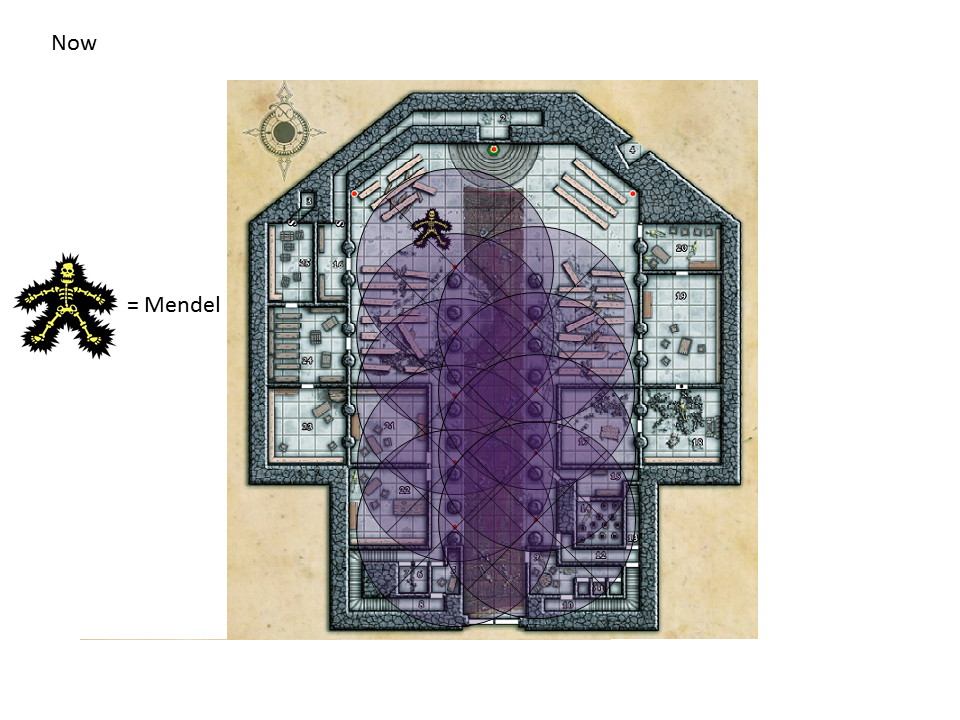 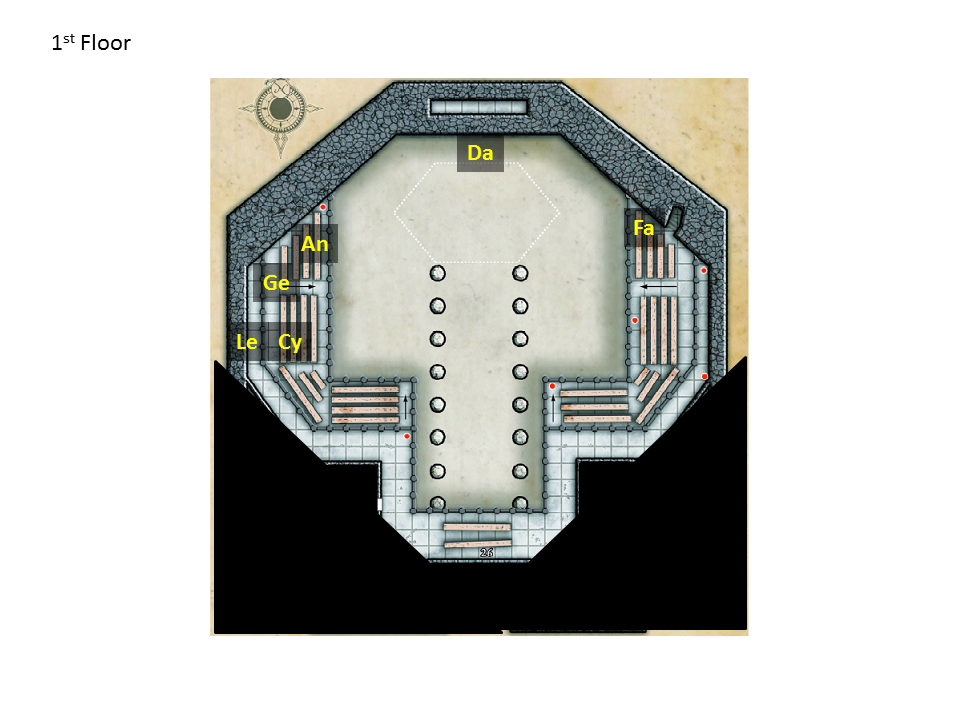 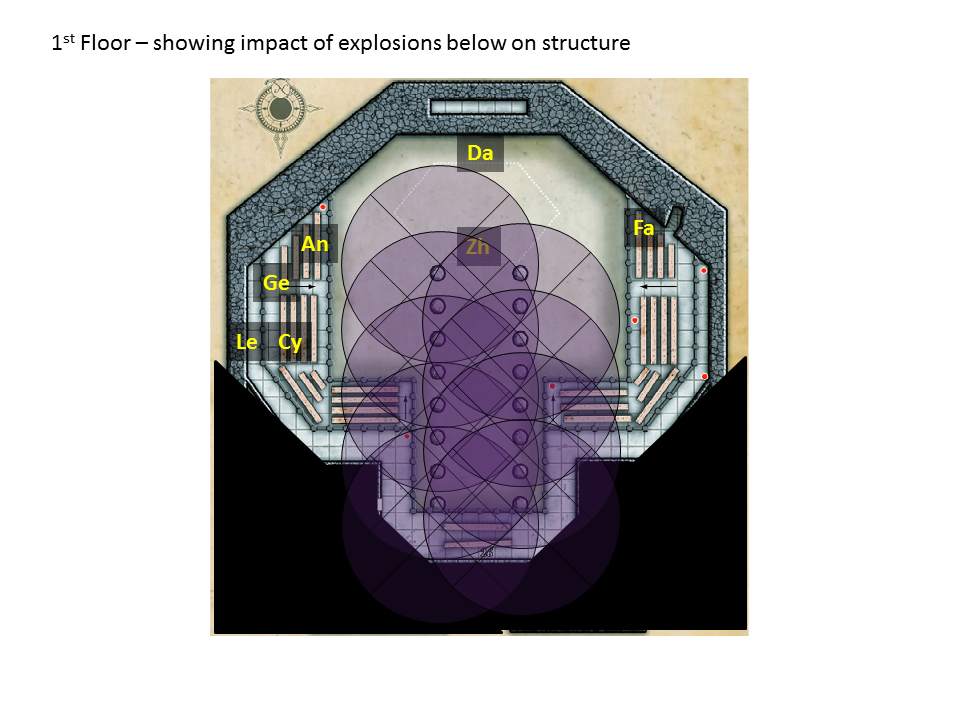