I'm happy to report that Legacy of White Plume Mountain is now released on the vault.

Thanks to all the custom content creators whose work I've tried to also showcae in this project, and to the playtesters for perserverance, feedback and advice.

And to those who've stuck with the NWN2 community, I really hope you enjoy my little sandbox in Faerun. 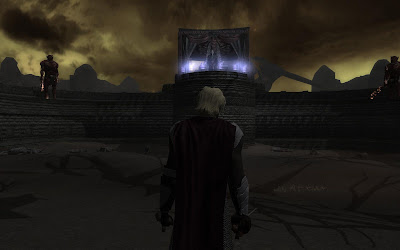 And this is me a few minutes later... 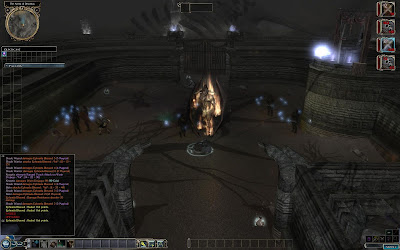 I'm really hoping people get a kick out of playing this. It's not a style to everyone's taste (mine included being story-lite), but I've had a blast building it, and I hope that shows. I'm upoading to the Vault as we speak but it may take some time (>600Mb in optimised RAR files). Will post again once it's approved.

Feel bad that I've not been active on my fellow builder's blogs recently (so much juicy stuff going on for NWN2 now! Hoping I can help play/test your work soon!) but that's due to lack of time - but the upside is that most spare time has been spent digging into the toolset. And hopefully I should be getting close - if all goes to plan, this weekend I intend to run through the main plot path - party of 4 level 7 PCs tackling in order White Plume Mountain, Return to White Plume Mountain, and the climactic Ex Keraptis Cum Amore. That's one long old school dungeon crawl right there, weighing in at a solid few hours. Focus will be to check for balance, but also to see if I can finally overcome the clingy bugs that have been plaguing me e.g. creatures that refuse to jump to a waypoint even when there's no good reason they shouldn't (will likely end up using script-hidden as a workaround). Plus there's a few old-school aspects that will need testing like magic decks of cards that completely screw up your PC (does anything cry classic D&D more than that?).

Since the last few play reports I've overhauled the balance of the entire campaign, but I think tweaking that could go on forever and I'll never please everyone, so I'll likely release soon and make any alterations on the fly. Hopefully the upcoming spate of releases will see more traffic back on the Vault and all new content can benefit from that.

So. If I'm lucky, end of the month doesn't look like too unrealistic a prospect.... eek.

Here's some screenies of the specific dungeon areas i've just finished adding scripts and dialogue to. Strange pools of bubbling alchemical mixtures - drink, swim, or avoid like the plague? Time to make those Wisdom checks.... 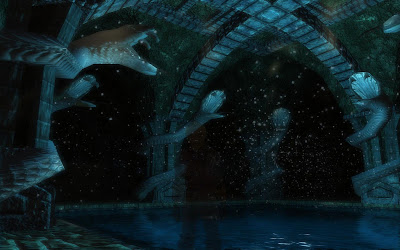 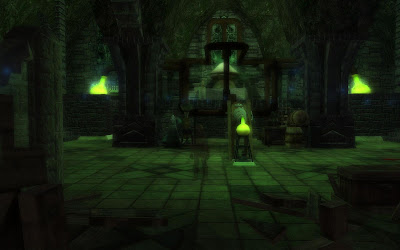 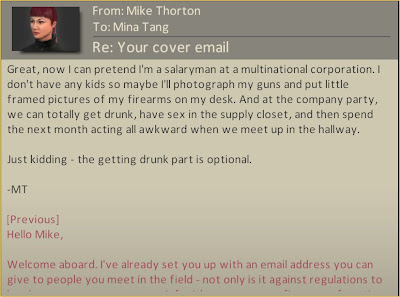 Needing a break from the continuous debugging of Dead Gnolls EYe Socket (pinned down crash to corrupted triggers, but its time consuming and repeptitive to delete each, test, repeat)... So I dropped into Alpha Protocol. Fun game with very nice ideas for roleplaying. But this, suave...?

Bond, and i'm going to stick my neck ou and say that Roger Moore is the definitive James Bond, would never type that email. if he'd just been given a cover identity inn an arms manufacturing plant ha may have stretched to a "I don't suppose you'd mind cleaning my rifle" with a raised eyebrow, but this...

But back to the debugging...