It was a slow start, with being out of the country most of March - and having to reacquaint myself with the toolset after a 6 month break - but have been chipping away my conversion of the Mud Sorcerer's Tomb for Chaos Wielder's Community Project. 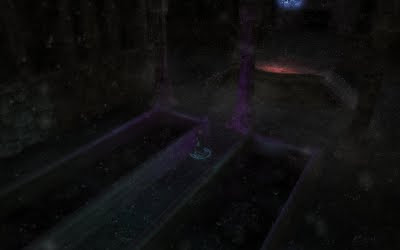 I'm useless at remembering to take screenshots in playtests. Here's the entrance where the workers' bodies have been unceremoniously dumped.

Nothing unsurmountable in the playtest, and might put up a link to share soon and get feedback on fleshing out with flavour text. The tomb is more about traps and puzzles, but the few combat encounters can be nasty due to resistances the creatures have. Thing I'm happiest I got working first time is - once inside the Mud Sorcerer's Tomb - any spell cast that calls on water/earth elements (including cold/acid) has a 50% chance of summoning a rogue elemental instead. Caused a few shocks for good old Brigit Chandler in the test run ;) . This worked so well, I might try something similar for the next adventure I'm due to face, when the PCs go up against the druids - reminds me of a spell my cleric in an old PnP game devised called 'Congregation' that could subvert any summoned creaturre called in a certain radius of the PC, making it an good celestial allied to the cleric, rather than the intended creature.

Something I've been toying with for a while (and reignited by Lance's recent post - nudge me Lance if I don't reply!), I'm going to work on a redesign of the blog to also cover more general, non-NWN2 but gaming related thoughts. Plus some projects I'm working on the side that are gaming related.

All of this in my non-existent free time, of course.

More to come, and an explanation for the new blog title, soon

By the way, any artistic types that have suggestions for images/artwork blog header based on that title, let me know!

...albeit enslaved to the corporate zombification process at work these past few months. Ain't no free time when you're an undead minion...

Glad to see LoWPM still chugging along, despite the bugged areas. Other than rebuild them from scratch, deleting them is a simpler option to solve the bugs (there's enough other areas in there), but I'm loathe to do that. I think the random bugs that some see 9journal updates) and other dont = or that some see with one install that then disappear on a reinstall - aren't helping lure me back to the toolset. But I have been dabbling in a bit of writing, planning, and pen-and-paper D&D, which is good to be inspired in again.

Will try and be around more - got a backlog of new mods to play!