Dacien took the party back to the ship, where Captain Nosmo Beldan greeted them officiously. There was some discussion of visiting the tortles to explain recent events, but when Nosmo explained the winds would take them quickest round the western side of the island back to Farshore, this was soon forgotten. Back in Farshore, Lavinia listened with interest to the reports, and was grateful to have her 'tribute' to the dragon turtle returned - rewarding them all for their efforts. When talk turned to future plans, she left them to it, but not before a brief discussio nabout taking trade goods back to Sasserine to try and spark interest  in the trading port. Mendel did talk with Manthalay about less above-board trade, which Manthalay seemed to agree with Lavinia was not to be the focus, although he did leave Mendel with some samples of an exotic fruit that he suggested not be handled without gloves.

The party set off for Sasserine, and spent much of the next few days shopping. Aloysius had returned from his travels with a substantial return, part of which was reinvested in the tailors shopfront in Shadowshore. Zhedd took some time to visit the Witchwardens, and look for additional items to go with the gloves he had commissioned from them.When he realised he didn't quite have the money for all the items, he asked for a 'loan' to cover the goods. Dark Priestess Teranaki was open to the offer - on the condition that Zhedd would partake in a mission for them. At the next full moon, undead would walk around the ruins of Chekitewhan, and adventuring parties would often interfere with the rituals; the Witchwardens wanted someone to stop the adventurers from doing so. When Zhedd complained he couldn't think of a way to achieve this, and a lack of willingness to help the organisation, Annah Teranaki grew angry at his lack of effort and imagination to aid the Witchwardens, and sent him away. The party set about collecting their goods, and planning the next stage of their adventure. Mendel had convinced the others to investigate the trade disruption in Emerond, so they first went to the Temple of Asterius and spoke with Lirali Woarali again. She explained that all caravans had been barred from entering Emerond recently, and exports of their prized alcoholic spirit had ceased. They were a secretive nation generally, but friendly and peaceful so this was unexpected. She described the Emerondians as similar in appearance to elves, but with a greenish tint to their skin, and living in strange cities that were grown within and form the forest trees themselves. Lirali put the party in touch with a caravaneer that was in the capital at the time the borders were closed. He had been trading metal goods with them, as it it something they did not generate themselves. He told a tale of the Emerondians being spooked by a comet falling from the sky, and parts of their plant-kingdom withering and collapsing. Antony asked around and also heard tales of some pale-skinned elves accompanied by a dark haired human with a goatee asking questions about Emerond - the party described Bargle form the wanted posters, and surmised this was he in the company of some shadow elves. Zhedd led the party to a small shrine to Ordana in the Sunrise district - there had been whispers that the Emerondians were followers of Mother Forest. However, the elven priestess they spoke to dismissed this idea - she claimed that whilst the Emerondians lived as one with the forest, it wasn't wholly natural; trees were grown out of proportion and beyond which they should be able to sustain themselves. She saw no sign of Ordana worship in their practices. Mendel gave her a donation for her time, and she clearly was surprised and unsure what to do with the money. 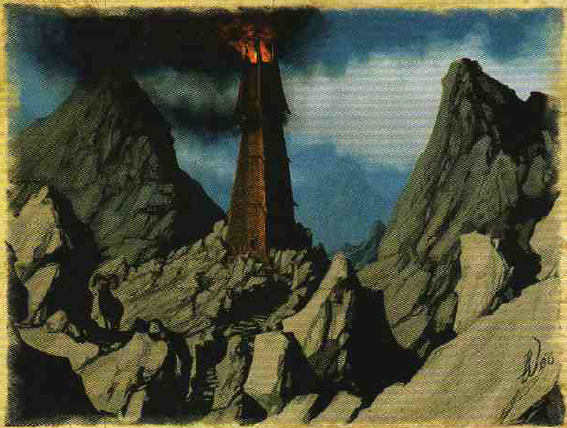 They then bought horses and set out to the south, aiming to make the border to the kingdom by nightfall. They rode past the plantations that surrounded Sasserine, and skirted the mountains to the east. The land broke into boggy swamp, where the rain run off from the mountains had collected, and thick verdant jungle, with the southerly caravan route dividing the two. In the distance, a rusted chimney bellowed smoke and flame above the mountains to the west, and a dark obsidian stone tower rose above the jungle to the east - the party guessed this was Chekitewhan. Zhedd, flying on Banshee above the party, dropped to meet the others when he and Faldak heard a strange voice in the trees. It was a manic, alien tongue that neither recognized. As Zhedd flew up to investigate, dark beams of energy flew out form the trees and struck Banshee. A pair of Beholders were in the canopy of the forest, and turned their antimagic eyes  on the path. Mendel and Gerald tried to make blind shots with bows and magic in their direction, as Dacien froze the air in front of them. Faldak and Ji charged  into the fray. In a moment of premptive karma, Ji fell foul to the disintegrate ray of one of the creatures. Faldak was charmed, but the rest of the party managed to kill the bests before anything further happened. Looking at the jungle from above, and the scarred bodies of the beholders, it appeared as though they had been squabbling and fighting each other - Dacien confirmed it was unusual to find them in this terrain, and their insanity meant they practically never worked in teams unless a Hive Mother guided their actions. Finding no sign of how they got here, the party set up camp and continued  in the morning.

Come dawn, Zhedd spotted the kingdom of Emerond a few miles to the south. it's border was plain to see - a ring of trees that were taller, lusher and a more vivid green than the surrounding jungle. The border traced a perfect arc, from what Zhedd could see. After a brief ride, the party came across a guard post on the trail - three of the green skinned folk standing with halberd drawn to block the path. Their weapons and armour were made from wood and hardened leaves. Behind them, a large snake sunned itself on a tree branch and a pair of giant flies waited with wickedly sharp forelimbs and saddles on their backs. The guards commanded the party to stop, but in discussion, when they heard the name Bargle and shadow elves mentioned along with an offer of help, they agreed to report back to the capital and see if they could be admitted. Eventually they were, and met by the High Councillor in the capital, who informed them King Jerem Rhody would meet with them in the baths presently.

The capital was an incredible feat of horticultural engineering - buildings formed from and within giant trees that spanned scores of feet across. There was preciseness to the growth of the trees that spoke against their natural origins, but at the extremities of the plants, blight and withering was clearly visible. The king met the party in a baths - a pool of sweet liquid fed from the phloem within the centre of the trunk of the largest tree. King Rhody listened to the party's tale and offer of help, and came round to the view that outsiders might be best placed to help with this situation. He was hesitant at first to describe in detail what he felt the problem might be, but as his story went on, probed by the party, it became clearer. He explained that a great power source - analogous to what the party would know as magic, but instead powered by technology, lay at the centre of the kingdom, and it was this that sustained the foresthome as it was and allowed the Emerondians to use the trees and plants as they did. The people of Emerond had long forsake the ways of the technology, and the king alluded to a great tragedy and sacrifice that was made long ago that precipitated this, and the centre of the kingdom was now off limits and potentially hazardous or toxic to enter. He feared something had recently happened to the power source that had weakened it, leading to the blight and affliction affecting the kingdom now. Two other things may be connected to this
- a group of shadow elves had been introduced to the king by Bargle, petitioning to access the technology. The king heard their plight - that the ancient forest home of the elves (Alfheim) had been invaded by the shadow elves and left a dark barren ruin, and the shadow elves were looking for a means to regrow it. The king had not granted them access, but he did not explain how he knew of Bargle
- a comet was seen falling from the sky and landing in the centre of the kingdom. King Rhody alluded to the fact that his people were not originally of this planet, and it may be that safeguards that were put in place to prevent his team interacting with natives could have been enacted.
If the party were willing to investigate the problem, the King would offer what he could in return. Only a small cadre of close advisers still knew the ways of technology, and he feared sending them would cause too much fear in the city at their disappearance, but they could be called upon at the right time if others were needed to solve the problem. He agreed to trade, special goods, and education as a reward, on the condition that the party not return for fear of spreading to much knowledge of the origins of his people amongst his subjects. The party agreed and enjoyed the rest of their bath, Antony feeling quite light headed by the end. 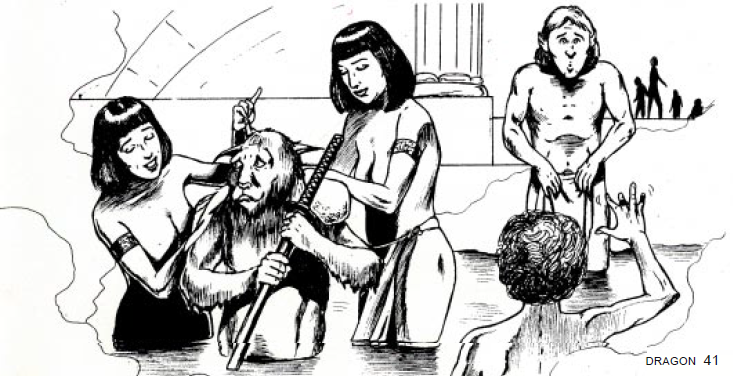 The following day, the party ventured beyond the tick wall of vegetation that hid the centre of the kingdom, and were given two canoes to navigate the mangrove swamps that lay beyond. They had barely left the Emerondians for 20 minutes before and dry booming voice rang out form ahead in Sylvan. "Leave my trees alone! Leave this place!" Zhedd replied that they were determined to press on through, and the trees, which had seemed to flinch at the party's presence, began to uproot and move closer.