In their hovel, the party further questioned Harliss and discussed what to do next. When talk turned to paying a visit to Tyrlandi, Mendel felt the presence in his mind again as Tyrlandi spoke to him through her greater scrying spell. She informed the party that she had a visit from both the monks and the harpies, looking to cement alliances and unite against the parties efforts in the town - and wondered what had happened next. She did not respond to any further questions.

The city was still bustling an on alert, so, fearing reprisals, the party set to sneak out of the city. They went in the direction of the north gate, but saw a swarm of thugs and leaping demons, so veered across the river. They scanned the eastern perimeter wall for possible exits, and found a gang of street kids gathered round a makeshift exit. Throwing a liberal amount of copper coins in their direction, the party left through the wall and stayed overnight in the shrubland outside using Dacien's rope trick.

The next day, the party looked for another way back into the city. Heading south, they found a path leading from a hatch in the wall toward the rocky shoreline. There, they spotted several bloated corpses, mostly human, but some animal too. The party examined the bodies from afar and saw signs of surgery on the discoloured cadavers - but unwilling to get too close, they left well alone.

Antony snuck through the hatch at the wall and past a priest that was sweeping grime and gore away from the back of a dark stone building and cellar hatch. He passed by and circled round to the front of the building. Two guards with rheumy eyes and blackened eyelids stood staring out to the harbour - around their necks hung black scythe and skull pendants, dark symbols of Thanatos, the entropic Grim Reaper. Antony engaged them in small talk and found out they were waiting for the infirm and injured to be brought to them by those in the city, and were willing to pay for the privilege. Heading back, Antony caught the eye of the priest on cleaning duties and found out that, for a bribe, he was willing to bring out belongings from the bodies that were brought to the temple. Hearing that a pirate of the Crimson Fleet was brought in recently, and wanting a diversion to allow the party to enter, he made the transaction, and acquired a cinnabryl bracelet for Harliss to use.

In the city, the party dodged several patrols to make their way to Porphyry House to speak with Tyrlandi. Her guard, a burly human, and her madam, a gnomish woman, led the party up a secret flight of stairs to the top floor. Tyrlandi, the beautiful exotic woman, was sprawled on a chaise-longe, sucking on lollipop as she waited for them. Her heritage seemed to be part nymph but tainted by entropic fiendish blood. The faint sound of a child crying could be heard. The party recognised the symbol at her neck as that of Talitha, the Queen of Treachery. Tyrlandi greeted them curiously, eager to learn about their aims in the city and seeking to get information from them about their various goals and the information they had learnt about the palace. She answered the parties questions, but demanded locks of hair in return, gaining them from Felix, Antony and Mendel. She explained that she wanted to rule the city, unrivalled, and saw Kedward as her biggest rival once the Crimson Fleet were dealt with. She wanted the harpies in her pocket too. She did share information with the party if they chose to go after Kedward - that Rhemus Caldakar, his gnomish travelling companion of old who was now running a golem making business, was friends on the surface but secretly desired Kedward's imp familiar Matylda, and was plotting to kidnap her. Kedward was also a diabolist and could call upon demons to aid him. She also let the party know that the Eighth Coil wer einfiltrated by araenae, and we paying the harpies to torture and interrogate Harliss - but she had been intercepting the payments to try and keep Harliss alive.

The party left with their information and set about taking on the eighth coil hideout. They tried to sneak round the back of the building but were spotted and a prolonged spellcasting battle ensued, involving pirate thugs and araene sorcerers. Fireballs and lightning bolts rattled the building as the party drove into the ranks, locking several others in the basement. In the end, several aranae escaped via fly, but the party did have one unconscious foe alive for interrogation. 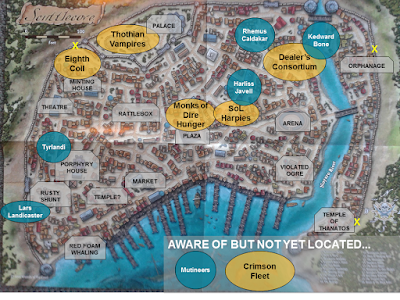