The party reconvened in the Dealer's Consortium, with Tyrlandi taking stock of her new domain and going through Kedward's paperwork. She asked the party if they had found Kedward's stash of treasure, and then coyly offered a race to find it. The party spent some time examining the interior but found no sign of secret doors. Outside, Mendel and Faldak examined the outside - eventually spotting the construction was such to accommodate a hole in the foundation. Antony spoke with thin figure lurking in the shadows - who turned out to be a former agent of Kedward's and eager to be a key contact for the new boss. Eventually, they spotted a disturbance in the structure, which they surmised to be a elemental or ethereal creature moving about the brickwork. Inside the building, Zhedd summoned some earth elementals and sent them below in search of a chamber whilst Faldak set about being a good dwarf, and took to digging a hole in the floor. After the elementals failed to return, a second foray was sent and reported back that spiky skinned fiends were present in a chamber  some 40ft below, with a dark aura that mad them feel unwelcome. Tyrlandi emerged from the upper floor, and angrily berated the party for damaging 'her' building. She then revealed that she had located the chamber and Kedward's treasures, and the demons were now under her control. Mendel seemed to set about berating and provoking her, which she did not take well to, and said he would no longer be welcome.

The party then sent some time planning how to get a boat or ship form the Scuttlecove harbour to use in their reconnaissance of the pirate base. Several ships seemed suitable,including Jerome's Up the Nooga, but the problem was to how to escape the maze of scuttled ships in the harbour without arousing suspicion. Then, it suddenly struck the party that Scuttlecove wasn't the only city nearby - on the main island Ne'er-do-Well, the city Crossroads where they met King Koryn could also be a safer place to set out from. Dacien teleported them there, and they spent a few days planning, shopping and spell-scribing there. Antony found a local fisherman named Wetherby, who was persuaded to take them out in a dogger he used for trawling in the seas east of Lesser Ne'er-do-Well.

Wetherby took them out at dawn, and with a good wind at their back they made good time through the straits. Jerome pointed out the arched stone marker, and there, a half-mile off shore, Wetherby dropped a sea anchor. Most of the party managed to pierce the illusions protecting the pirate base - visible to them as a small scattering of huts around a tower in the midst of a wide saltmarsh. The party, using seeming, set about pretending to be fishermen, whilst Zhedd, invisible and in the guise of a seabird, let for a more detailed reconnoitre. He spent quite some time examining the base, seeing several dishevelled red-skinned figures in gibbets scattered about the base. Occasionally, pirates would emerge from the huts and stroll around swollen, squeaking walkways, on guard or latrine duty. The most remarkable feature was a trio of large petrified trees to the rear of the base, with five ships of various sizes impossibly hanging in their midst. They were connected by rope ladders and rope bridges (string in the picture), and a few pirates were on the decks. Ballistae were visible on the uppermost ship, and at the base, a large elephant-like spider demon stood guard. 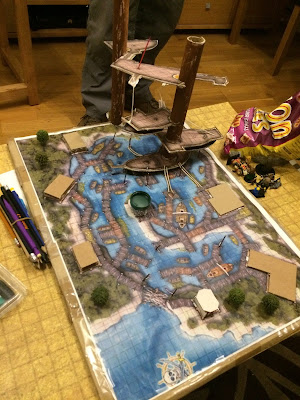 Zhedd flew out into the saltmarsh and looked for areas to rendez-vous if things went sour, but as he flew back closer to the ships one of the pirates seemed to notice Zhedd despite his disguise and sounded an alarm - trying also to dispel the invisibility. Three harpies flew out to he ship, invisible, and threw the party into disarray as some were lured overboard - but were eventually fought off. Zhedd flew back to the fishing ship by a roundabout route, but Wetherby felt a tingle as Dacien confirmed they were being scryed. A pirate teleported on board scimitar in hand, but suprised the party as they closed in and it reverted to its true form

The creatures resistances made it a slow battle, but it focussed its many attacks on Mendel in fear of the sun blade he carried. It's scimitars and piercing gaze seemed to carry a supernatural damage that drained the party to their core, and the fishing crew too - the party were to later calculate that this damage would need to be treated in specially consecrated areas into order to be healed. Eventually, the creature sought to escape, and dove into the water, desperately trying to dispel the dimensional anchor Dacien had placed up on it. The party limped back to Crossroads to recover and plan.