The party spent much time in Sasserine planning their next steps and distributing or liquidating their loot. The chest proved a focus, and eventually the party realised that it was a fabled treasure itself - the Iron Chest of Dahnakriss, an infamous Master Thief and arcane trickster known to ply his trade in Thyatis and Karamiekos. To keep his ill-gotten gains safe, he devised a series of chests and lockers with intricate traps. This chest was guarded by each of the gargoyle faces, which could be manipulated into different expressions - in the right combination the chest would unlock. Antony set about trying combinations, based on the rhyme they found in Captain Wyther's bedstead. On the second attempt, the chest popped open, revealing further treasures of the fleet. These included another gem - the Heartstone, said to be an artifact that appeared at moments of selection of great leaders and something Dahnakriss had  a penchant for stealing. Also present was the Wakeportal figurehead the captain had mentioned, wrapped in a cloth map that indicated the location of the various sea portals to the Astral Plane. The annotation on the map indicated it was from Greatrealm, a city in Hule. 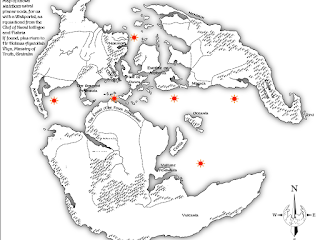 Preparations complete, the party teleported to Crossroads, and made their approach to report into the King Koryn. They were told to meet aboard the Maiden's Favour, a ship moored in the harbour. There, the king met them with a lobster dinner, and questioned them about the outcome of their efforts to bring some element of control and stability to the civil war-strewn city of Scuttlecove. The king wasn't overly happy with certain aspects - that his former friend Kedward had been feebleminded and handed over as a slave, that a follower of Talitha was now the most potent force in the city; but through Gerald's clever diplomacy they were able to convince him of the necessity of the outcome as it was, and that they may return to deal with some of the outstanding issues now the Crimson Fleet was defeated. They also made a gift of the Iron Chest, which was enough for the King to make good on his promise of favours and rewards.

The news about the shadow pearls troubled the King and he agreed to make an introduction to the Emperor of Alphatia, Heldeberan No-Man's-Fool. In the fortnight it took to arrange the meeting, the party stayed over in Sasserine and indulged in shopping. During the stay, Zhedd noticed one night when the animal life around the tailors seemed to disappear, and Antony spotted a bat in the eaves opposite seeming to watch the goings on in the property. It detected as a powerful undead, but when approached it fled. The next day, Mendel and Dacien paid a visit to the Witchwadens to question them about the event. They were met by a stand offish Her Dark Priestess Annah Teranaki, who did little to answer their questions and went to lengths to point out that sentient undead should be able to do as they please like any living person. As they left, however, she did ask Dacien "How did he find Scuttlecove?".

The party travelled to Sundsvall, capital of Alphatia, to meet the Emperor, joined by a priest of Koryis as his advisor. He welcomed the party and thanked them for their efforts in bringing the shadow pearl problem to light. He agreed to make approaches to leaders of other nations to alert them, but felt this needed to be handled delicately - to avoid panic and mistrust. Key would be to find the Master Pearl and deal with the problem at its source. He offered the party a ship in order to make use of the Wakeportal, should they wish. He also offered up the resources of the capital's libraries for further research into Demogorgon, Gaping Maw, the gemstones, Arik, and other problems the party happened to be keeping under their hats.