The party decided they had chanced their luck enough with the strange undead creatures, and left them to sail off towards the islands that loomed ahead. 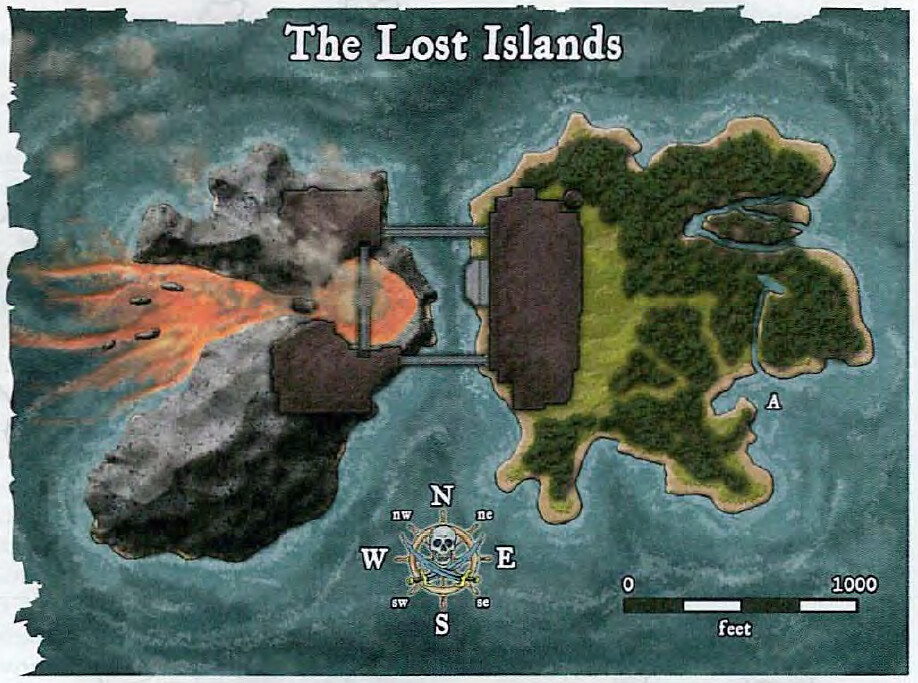 The destination was an island – well, two island, rent asunder by a massive volcanic eruption. On the western face, the ragged sheer rocky volcano still fumed and billowed black smoke, and lava poured into the sea. One the eastern side, the island was thick with lush jungle vegetation. The more sharp-eyed party members caught glimpses of a structure perched between the tips of the the two island mountains, almost lost in the smoke form the volcano. It appeared to be a castle, with three main structures that were linked across the islands by bridges over lava and tumultuous sea.

With the spyglass, the party spotted the wreck of a ship nestled in a cove on the jungle side. Not wanting to endanger the crew of the Intrepid and captain Dromedon, they left instructions for the ship to keep distant and find safe harbour elsewhere, whilst Dacien teleported the party to the wreck. They found the ship in mostly good shape, and as though the crew had left in a more-or-less orderly fashion, although the ship was beached on rocks higher than the tidemark, and the mainmast wrenched and twisted, as though grabbed from above. There was some guano on the beach that Dacien tried to use telekinesis to bring closer and examine. They were interrupted by the culprit – a titanic pteranodon that was diving out of the smoky caldera towards the shore. The party dove for cover, as the beast’s claws caught naught but air. A few arrows and fireballs chased it off as it glided around the headland and out of sight

The guano contained the bones of mostly apes and demonic creatures, particularly vrocks, giving the party some clues about the local creatures. The party set off up the steep jungle towards the peak and the structure there. The castle came into view, a large austere stone structure, covered in lewd depictions of Demogorgon engaged in various acts of debauchery. The castle was also clearly damaged form the volcanic activity – a large hole demolished parts of the wall and roof, and appeared to allow the only access to the interior. A shimmering dome covered the castle, which Dacien deduced to be powerful artefact level magic – a planar abjuration similar to forbiddance, but also including some mind-compulsion enchantment effect he could not fully interpret. A small tower, built of skulls instead of bricks, lay just outside the field, and the party set out to investigate that first.
The tower proved to be empty, save for filth and detritus littering the floor. The ceiling was pitch black, into which Mendel fired two arrows – only to be greeted by two large black puddings falling down towards him. Wary of the danger these things posed, the party threw their most powerful magic at them, only to disturb the rest of the pteranodon that was nesting atop the tower. This jumped down, scattering the party, and joined the battle – only to be attacked by the black pudding behind it. The party finally killed the beasts, and in searching the nest found a broom of flying  made from coral and byssus, and an armoire of concealment.

After resting up, the party decided to carefully approach the main castle – until Mendel blundered through the shimmering field. Mendel appeared unharmed but when eventually joined by the others, most of the party succumbed to a sympathy effect that caused them to believe this castle – now Demogorgon’s prison, was precisely where they were meant to be. Only Faldak, Gerald and Lenny remained unaffected. Undeterred, and in most cases spurred on, the party explored inside the castle. There was a large chasm splitting the main chamber in two, and a crude wall of debris and bodies piled the other side. To the west the party heard a cacophony of clashing, gnashing wailing and shrieking. The party flew over the chasm and the wall, and found some small buildings, containing maggots, worms, larvae (corrupted souls) and effigies of Demogorgon. A large stone statue of Demogorgon , much like the one they encountered on the Isle of Dread, patrolled the area, as did a band of vrocks that the party quickly dispatched. They kept the statue at bay, but whilst examining vrock bodies, a demonic female appeared and tried to assassinate Mendel. When her strike failed, she disappeared again, leaving the party on edge.

The doors in the castle/prison were made from a metal mined on entropy-tainted planes, that carried and addictive poisonous sheen. The noise to the west came from several metal cages – over a hundred, teeming with prisoners of various breeds – mostly demonic. The party started talking to a quadrone modron, apparently an agent of Noumena (an immortal on the Council of Intrusion) desperate to report back. Before they could finish the discussions, a pack of Hezrou  prison guards attacked. They party fended off the worst of the assault, but the rest retreated , wailing pathetically for their ‘boss’.

It's finally here and its awesome. Really appreciate it man 😊. I really like that you take your time making these mixes, cause the waiting time only makes it so much more sweet.

Looks like I've found exactly what I'll be listening to while I write my next book!
Thanks for this, all your mixes are awesome :D﻿