The party had some time to finalise preparations and so set to shopping, meeting friends and leaving messages for loved ones before the expedition to the planes

The party teleported to Farshore and spoke with Manthalay and Lavinia. The settlement seemed to be doing well; growing beyond its previous walls, and some of the previous buildings torn down to make way for more warehouses. Ji's monastery had been completed, and Mendel's look-out post almost done. The party dined with Lavinia and spoke of the task to come - with the potential to end Vanthus' threat with some permanence. Lavinia gave them her blessing, her love for her brother long since dead.

Zhedd bade his farewell to the party - his concern with the oncoming shadow pearl threat was more about the direct threat to the elven peoples than to Mystara itself, and so, should the party fail, he would see to it the elven nation of Wendar, and his Vyalia clan to the south, was secure.

The party paid Lady Silvermane a visit in Sasserine. The Church of the Whirling Fury opened to them, and she greeted them eagerly. She had heard tell of the defeat of the Crimson Fleet from her agents around Ne'er-do-Well, and was eager to hear of progress. Agents of the Church were already mobilised,  but their numbers few. She introduced the party to one agent - Lundgryn, a dwarven druid from Rockhome - as someone who could help the party on their next endeavours. He had encountered Demogorgon activity in Rockhome and had heard tell that a band of ogres had stolen a Forge of Power there.

Emperor Heldeberan instructed the party that the ship was ready in port at Draco, where they could inspect it and meet the captain. The ship was a two-masted brig - sturdily built and reinforced for battle, mounted with catapult and ballista. They met the captain in a local inn, who introduced himself as Dromedon - a name that gave some among the party pause, as he was the Emperor's son, and probably the Emperor's way of keeping the party on the straight and narrow from afar

The party sailed from Draco with the crew down to the Sead of Dread, to get the measure of the ship and its men. They were all hardened sailors and marines, but far outclassed by the party in terms of skill and abilities as adventurers. 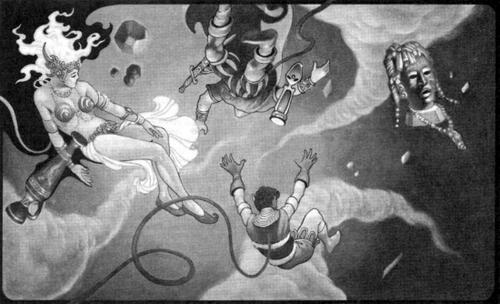 With Dacien's ability to teleport, the party were not confined to the ship. At Mendel's behest, they decided to travel for the first time (for any significant period of time) to the Astral Plane. They found it a bright, featureless plane of spangly beige-gold, stretching as far as the eye could see. Movement was propelled by thought and willpower alone, with 'up' being whichever way the individual chose it to be - but some experimentation quickly showed that the cleverest amongst the party were best able to adapt to and take advantage of this. The party travelled, more or less randomly, for some time, thinking of different destinations, to see what they could find. They came across


The party returned to the prime, thinking the Astral a very boring place

When the ship Intrepid was ready, the party affixed the wakeportal to the figurehead and set off. Dromedon, as ship's captain, could feel the pull from the magical artifact and set sail into the midst of the Sea of Dread. The sea around the ship started to churn and fume with sulphurous stench. Quick and stronger, then suddenly the party were pulled into the Astral. There, the ship's charts gave them a straight steer to the dark portal that led through to Gaping Maw.

The Intrepid emerged into a roiling storm, waves crashing around them twice as high as the ship. Gerald quickly acted to calm the weather, and allowed the crew to wrest back control of the ship from the lashing winds. Several islands could be seen in the distance through the clouds, and the party headed to the nearest. The lookout spotted  a strange form floating across the waves in the distance - less ship, more amorphous blob of congealed...something. A fiery light in a cage could be seen from afar atop this blob-ship, with two dark figures prowling its surface.They appeared to have not spotted the party, but Gerald's zone of calmed weather would soon intersect them. The party instructed the captain to intersect their course, and they were soon spotted. The dark figures teleported aboard the ship - dark unholy fiends, that stunned the crew with their hateful speech. The party sprang to their defence, Faldak taking a deep blow. The creatures fought viciously, but one was felled and turned into vapour as it died. The other teleported back to the other ship, as the vapour retreated in that direction too. The party mulled over what to next.